If you have chosen to undergo Plastic surgery, it in no way proves that you are obsessed with your looks. If people around you make you feel like that, it is best to ignore them.

It can also mean that there is part of your body that concerns you, makes you feel less confident, which is your reason to rectify or improve. 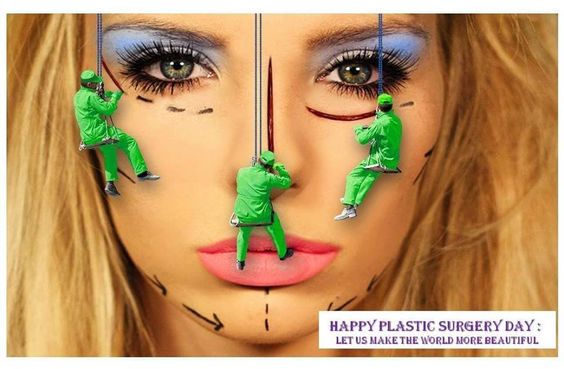 1. Plastic surgery is for self-obsessed people: When women apply make-up, they don’t do it because they are obsessed with themselves, they do it to put their best foot forward and feel more confident.

Most people get cosmetic surgery done for the same reason. Rather than being obsessed with their facial looks or body structure, most of the people opting for plastic surgery may be unhappy with a specific feature of their appearance.

Plastic surgery is also used for different purposes. It can help to enhance or fix your appearance as well as the function of any of your body parts. It is true that many have psychological problems and wish to fix their life through cosmetic surgery, but that is only a small percentage of the population.

Not all who undergo the knife are rich or famous. Most people who get cosmetic surgery are common people who are interested in boosting their self-esteem and confidence by improving their appearance.

3. Cosmetic surgery is ONLY for women: Though the majority of plastic surgery patients are women, cosmetic surgery is becoming more popular with men every year. Research reported that more than 1.5 million cosmetic procedures were performed on men in the year 2017.

Many men opt for surgery to boost their confidence and success in their lives. The most popular cosmetic surgery for men last year was liposuction.

5. It is all about vanity – This is one of the most incorrect myths about plastic surgery because it has led few to criticize and look down on those who elect to enhance their appearance through plastic surgery.

The truth is that every person’s reasons for undergoing plastic surgery are different. Far from being superficial, in many cases procedures like Otoplasty, which corrects issues with ears in both child and adult patients, have been found to have positive effects on one’s self-image.

Same goes with Breast reduction, Tummy tuck or even Body lift. Breast reduction helps women get rid of heavy breasts and relieves them of neck and shoulder pain besides making it easy for them to participate better in physical activities and improves their self-body image.

Tummy tuck and Body lift are also helpful for men and women with skin overhang which can result in skin problems and other problems with hygiene and cleanliness.

6. Liposuction is for losing weight: While liposuction involves removing fat from the body, it’s performed to remove fat from particular areas. For a normal person with extra fat in a particular area, liposuction is a good option. However, there are safety limits associated with it. At any given time, only 10% of the total body fat can be safely removed.

The procedure is most helpful in someone who is close to his or her body weight and wishes to remove stubborn fat from an area to contour the body. If someone is interested in losing overall weight, weight loss surgery and not liposuction is the answer.
1
7. After Liposuction, fat appears in other areas: If fat appears after some time in other areas, it is not because of the procedure. During liposuction, fat cells are removed from the area where liposuction is performed. The issue of increased fat in other places post-liposuction may be because of poor dietary habits and a lot of fat intake which gets deposited at areas other than where the liposuction was performed.

8. Sun exposure after surgery is off-limits: Ask your doctor about the exact post-surgical instructions to follow, but avoiding the sun is only for few weeks after facial procedures. It is a better idea to have limited access to the sun after surgery since it can delay healing and cause scars to redden. But the sun is off limits forever is completely a myth. And mind you, there are no restrictions on sun exposure after body procedures unless you are planning to expose the sutures directly to the sun.

9. Price is too high: No more because of the fact that countries like India offer cosmetic surgery at a much affordable cost. If you are among those living in the UK, USA or any Western country and have not been able to afford the cost locally, plastic surgery abroad is the answers for you. India has world-class plastic surgeons – you get best results without compromising on the quality of care or services.

10. Botox looks unnatural: Botox is not the most popular treatment in the world because it makes people’s faces different and somewhat looks fake. It is popular because it is an effective and quick minimally invasive procedure that softens wrinkles while retaining the natural look of the face. Doctors who use a large amount of Botox can cause patients to temporarily lose control over the action of their muscles, giving them not so natural appearance. But the majority of doctors are experienced enough to not do this. This is the reason why choosing the right doctor is important.